skip to main | skip to sidebar

Some pictures of weaving in progress.

A warp of 2/8 cotton in huck lace for tea towels. The warp came out a little bit narrower than I had planned, so the towels will be small, but I like the colours. I was just trying to use up green cotton that I had left over from an order for a lime green runner.

The last silk warp on my baby wolf.  This warp is off now and I will take more photos when all the fringes have been twisted.

A chenille warp on my Nilus loom. I put on 13 yds of chenille , shading colours across my sectional warp beam. This is an experiment to try using chenille warp and weft and to use merino for differential shrinkage. The sett is 16 epi.  I cut one piece  off after weaving 86", to check shrinkage. I washed it by soaking it in the machine with little or no agitation and carefully spinning some water out and drying it in the dryer until it had shrunk to the size and look that I wanted.  It came out beautiful and velvety and just the right size. I'm really pleased with it. I plan to make a poncho for Corrie plus 1 other poncho and a shawl.
Posted by Sandra in Kamloops BC at 3:43 PM No comments: Links to this post 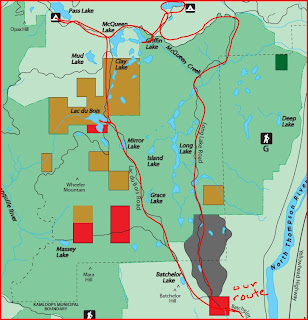 The weather was sunny and cool on Monday, after a rainy weekend. We spent the whole day geocaching in the Lac du Bois grasslands. They were pretty this time of year, but didn't have nearly as much growth as other areas to the east.  Still, it was nice to see them while they are still green.

It wasn't in the tree! 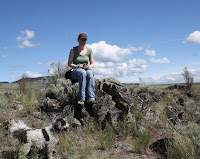 The dogs are helping.

This is an old cabin at Griffin Lake
We drove to Pass Lake and then over to Isobel Lake where we walked all the way around on the interpretive trail. We drove home on the long Lake Road through the Eastern side of the grasslands.

Posted by Sandra in Kamloops BC at 8:55 AM No comments: Links to this post

On Sunday afternoon we hiked up part of Sunrise Mountain, from the Uplands trails , to do 2 geo caches. It was a very, long steep climb. The first cache we came to was Zilch, and from there we found a beautiful hidden valley with lots of tall grass and wild flowers. This led us to the Citius cache which was on a bluff over looking the valley. The views were spectacular. We chose a difficult , steep way to come down and would have been better backtracking a bit. We left our house at 3pm and made it home by 6:45 to watch the Lost finale. It was a great hile and we plan to go back sometime.

Kamloops lake is in the distance looking west. 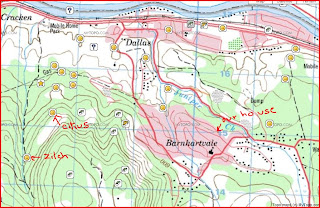 Posted by Sandra in Kamloops BC at 7:46 PM No comments: Links to this post

On Sunday afternoon we drove up to the Campbell Lake - Monte hills area to do the Georgie Porgie series of caches and explore some new roads.  We found all the caches and found some roads that we had never been on before.

This is the large mudhole near the top that we drove through and came out on the George main road.  The silver nano in the tree is the first Georgie-Porgie cache.

This old cabin was down a road that was blocked off because of the swift moving creek.

These are some of the caches along a really pretty ridge overlooking the creek. The grass was really high in this area and the trees were very large and old. 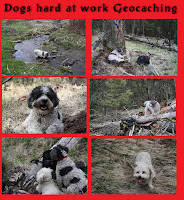 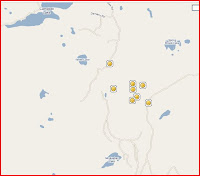 Georgie-Porgie caches.
After we found the caches we carried on and found the road to McGlashen Lake. We had never been there before because we thought the road would be too rough, and we weren't sure where the road was. The lake is beautifu,l with lots of granite cliffs and shoreline. We'll be coming back a lot I'm sure. It turned out to be only 40 min. from our house.

Our route with the roads that we found.
Posted by Sandra in Kamloops BC at 11:53 AM No comments: Links to this post

Here are some pictures of works in progress in my  studio.

The last painted silk warp on the baby wolf.

Some silk scarves waiting to have the fringe twisted.

The last of 6 placemats in the Kamloops Gold colourway/kaki on my big loom. I still have to weave gold and ivory. There is enough warp for 14 more mats and 2 runners.

The chenille warp for  puckered shawls and poncho on my 45" loom.

A 2/8 cotton warp ready to go on Shelley for tea towels in huck lace.
Posted by Sandra in Kamloops BC at 6:33 PM No comments: Links to this post

On Sunday we drove out towards Chase, on the other side of the river, to do some Geo caching and to find some rocks for our pond. The day was lovely, one of the first warm, almost summer like days we've had this year.

These pictures are from a cache in the hills above Pritchard on the north side of the river.  Martin Mountain is still snow covered in the background. The grasslands are really green right now and a lot of the flowers are over. The Balsam Root that normally covers these hills didn't do very well this year and is a lot smaller than normal.

The South Thompson river from the bridge at Pritchard. The river has come up a lot in the last few weeks, but still has a long way to go.

A view of Niskonlith lake near Chase, looking east. Some of the dead trees from the fire in 2003 can be seen in this picture.

An early bunch of Paintbrush flowers blooming in the shade and a single late Arnica flower. We also saw Penstemon, Lupine and Larkspur blooming.
Posted by Sandra in Kamloops BC at 1:59 PM No comments: Links to this post

Sandra in Kamloops BC